Besides baking (Once Upon a Time Bakery) and teaching literacy (Qara Academy) and being an ND (Granny Good-Food), I love to study law (Granny Good-Law). Today I will wear that hat.

My son recently got arrested in Austin at the Tech9 concert at Emo's Music Venue. The facts of the arrest aside (which have merited an entirely different letter to Attorney General Ken Paxton), you need to see something in the paperwork that should make you afraid, very afraid, for the future of liberty.
"I Promise [sic] to make my personal appearance at the designated court indicated above for the listed charge(s). I ackonwledge [sic] that failure to apper [sic] will result in a warrant being issued for my arrest."

Once I wrote a check and made an error, so I scratched it out. The bank clerk would not accept my check without me initialing my error. How does the City of Austin make errors on a document of far more importance, one that deprives a man of his God-given right to liberty, and then just scratch it out in no less than TWO places? (4/27/00 and Total Days Credit) An Austin policeman has said my son was drunk. After looking at this shoddy, erroneous, illegible and illegal paperwork, I can’t help but wonder what these police clerks were drinking. 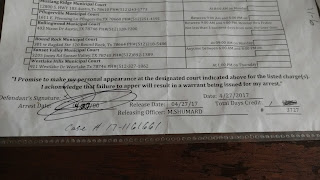 If the City of Austin Police Dept. is not concerned about rules of grammar, might they not care about the jot and tittles of law? As it turns out, that is the case, indeed. The justice system has been bastardized into big business, much like what Big Pharma has done to medicine; what Big Ag has done to farming; and what Big Ed has done to the independent, intelligent mind. Big Justice does not exist for keeping the peace and protecting the public and securing restitution for victims; as journalist-political consultant Scott Henson ("Grits for Breakfast") says, "You may beat the rap, but you won't beat the ride."

Scott nailed it. Every ride generates income and job security for cops, judges, prosecutors, lawyers, the infrastructure of janitors, cooks, and clerks -- but beyond that, the system is so much more corrupt than you can imagine, as you will see.

How do we begin to understand the problem? By studying the nature of wealth. First lesson: There Is No Money. Federal Reserve Notes are not money; they are debt notes. The only wealth is the Human Soul. The Human Soul resides in the Human Body and is kept alive with Human Blood. “The life is in the blood,” we were told (Leviticus 17:11) so many years ago, and it’s still true today.

Second lesson: There is no government, no Body Politick, no We the People. There are only corporations. Your city, county, school district, state, and federal government (Act of 1871) are corporations. You can find their Dun and Bradstreet numbers. But corporations are fiction, and exist on paper only. Corporations must, therefore, secure life from somewhere. You, your flesh and blood, fund corporations. The 13th Amendment legally made prisons the new plantation and corporations are the new massah. Man will always make “legal” whatever abomination his collective counsels vote upon. Bastiat, the 19th century French economist, taught us that man only has two choices for providing his needs: work with his own efforts, or steal from others, “legal plunder.”

As a prisoner, your sweat is used for corporate slave labor by such as Dell, Victoria’s Secret, even Whole Foods. Prison labor is the backbone of the economy and essential to corporate profits, and surely is not one reason unemployment is high. Surely. In Lockhart, Texas, where I live, the Economic Development Corporation boasts of the local prison having “500 male and 500 female inmates ready to help with your business,” flaming the fire of 3.9 per cent unemployment rate for people of Caldwell County. Apparently, it’s not the wetbacks taking our jobs; it’s prisoners.

The labor, i.e., sweat, taken from incarcerated slaves comes from blood. Unlawful use of a man’s labor leads to chronic stress and higher cortisol levels, which leads to catabolism of muscle and physical weakness; higher glucose levels which can bring on diabetes; and higher blood pressure – and early death. Unlawful slavery puts bloodguilt on all who touch the system: something for cops, judges, and prison guards – and owners of stocks and bonds – to weigh on their conscience. I can’t help but think that some people’s health issues have a spiritual connection to what they do for a paycheck or where they invest their money.

It is perhaps not coincidence that “stocks and bonds” originally referred to stocks that prisoners would be confined in so that people could throw rotten tomatoes at them. A “stockade” can be a reference to a prison. Bonds are restraints like shackles or handcuffs.

Today, “stocks and bonds” refer to financial investments but is still reflective of the original meanings. One of the most lucrative stocks is private prisons. Today’s (June 12) stock value of Corrections Corporation of America is NYSE / CXW $31.07 – 0.55. But there is a problem with this investment. There are just not enough robberies, murders, and social mayhem to fill the private prisons, so what's a Revenue Enhancer, I mean, cop, to do? Arrest, arrest, arrest. And the courts? Fine, fine, fine.

Profitability of the Warrantless Arrest

The warrantless arrest was greatly feared by our legal-minded forbears as having the most potential for abuse; today, it is the sweet spot of Big Justice. Cops have become the judge, jury, and executioner on the street. In the days of old, a warrantless arrest would land you in front of a magistrate so that rogue or vindictive officers were held in check. No more. You will be given a “citation” which you can fight some weeks later, when the court’s agent takes the stand in his costume and swears that you were guilty.

Everyone is fair game for these profitable, warrantless arrests, even children. Texas is infamous for its “School to Prison Pipeline.” I’ve seen it for myself while doing court watching (it’s what Grammas who are righteously indignant about corruption do in their spare time). It was in Gonzales, Texas, and I saw child after child come up and get whacked with heavy fines, and one could tell that these were not 90210 socio-economic kinds of kids. The fines would probably go unpaid, meaning another court date, and possibly incarceration for their guardians. Statewide, there were 59,054 non-traffic Class C misdemeanor cases filed against juveniles in 2015-16, but the previous four years only saw 41,304 tickets and complaints. This includes children as young as 10-12 years old, for behavior like spraying perfume on oneself in the classroom, offenses that would formerly earn a trip to the Principal’s Office.

How many people on a given Saturday night are arrested with a PI, held (read: unlawfully kidnapped), then given this piece of paper in lieu of seeing a magistrate, in violation of Texas law? My guess, hundreds. How many are denied due process? All of them. How much revenue does this bring to the City of Austin when police disregard the law, not being slowed down by treating each arrestee lawfully? My guess is, millions.

Misprisions of the Clerk

Now, for the top of the same paper. Here we have my son’s name – misspelled. His address is wrong. So much for attention to detail, precision, and caution when it comes to taking someone’s liberty. We’ll have fun with the PI charge in a moment, but the most glaring trespass of justice is the 0 after Citation #. This is a lie! They can call it a “Class C Misdemeanor Release to Appear,” but it’s a citation! They must lie in order to flaunt the law. The words “YOU MUST APPEAR” is a summons, and that makes this document a citation.

Why do they not want to call it a citation? Because according to Texas Code of Criminal Procedure, Art. 14.06(b), someone who has been arrested on the charge of PI is not eligible for a citation, and must be taken to a magistrate. So it can’t be called a Citation because that would mean the City of Austin Police Dept. is committing a crime! 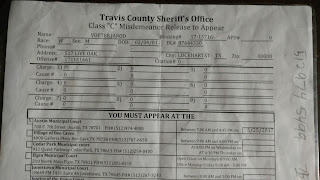 The charge is “PI.” What is that? Possibly, it refers to Public Intoxication. But possibly, it could mean “Pending Investigation” or any number of other meanings:

Chapter 49 of Title 10 of the Texas Penal Code, covers every possible aspect of public intoxication. There are 3,666 words in this Chapter, with twelve subsections and 102 possible violations. Which of those 102 violations does the City of Austin make a charge against him for?

The City of Austin’s police took the time to deprive Jared of his liberty; legally they owed him due process. That due process includes naming the exact charge and allowing him to see a magistrate, not just flippantly and carelessly running another one through the system.

If they are too lazy, or rushed, or incompetent to do the right thing, is that not a far greater crime than someone who has had a beer at a bar? My son did not create a victim, either by harming himself or others or property. It is the City of Austin Police Dept. that is creating the victim when they falsely imprison and deprive people of liberty and employ clerks who cannot do simple paperwork.

Good grammar is irrelevant when the goal is plundering the people for revenue. If the City of Austin Police Dept. desires to arrest people for breaking the law, they are morally obligated to obey the law themselves.

What was the outcome?

The outcome is that the prosecutor dropped the charges. My son was ready to go to trial, and made a claim for $752K for all the violations of Texas Code of Criminal Procedure that the police had violated. The prosecutor knew that if the jury had a chance to listen and understand how Austin was racketeering, that my son had a high chance of winning.