My husband Mike, my Dad, and a friend invested in this little fixer-upper in N. Long Beach in 1988. As it happened, the quick flip took 10 years. It was Gethsemane to me, suffering at every point. But the good Lord turned it into Graceland, because it's by His grace that our marriage survived (and even my husband!).

A big job went bad, client didn't pay us, and we ended up living in it before it was done. Mike had seen it coming, so I told him I needed three things to move in: a kitchen sink, a bathtub, and a toilet.

Oh, how I wish I had been more specific. Like asking for a heater, walls, cabinets, or insulation. The kitchen sink was a laundry tub, the bathtub had no hot water, but praise God the toilet flushed! We cooked with a microwave (this was before we knew better) and a hot plate. Dishes were washed in cold water with a hose in the backyard. Bath time meant heating water in the microwave, hot plate, and coffee pot, then running it upstairs to the tub. This had to be done at 4pm or so when the sun hit that side of the house, radiated the heat on the black tar paper, and took the winter chill off just a wee bit. Timing made the difference between a cold bath and at best, a tepid one.

We had moved in on Thanksgiving weekend, and I had cooked our dinner at the other house and brought it here. As we sat around the makeshift table with one light over us, no heat, the chill of the damp ocean air stiffening the gravy, I silently apologized to the Pilgrims. I had been critical of them landing at Plymouth Rock in winter, with miserable conditions. I realized that you do what you gotta do. (Ironically, we had lived for 10 years on Plymouth St.)

There was no heater, except for a little portable. We only had one wall plug, so we had to choose between a light on the end of an extension cord in the dark bathroom and heat. The second month we had to forego the heater as the electric bill was several hundred. I'd take the kids to the porch around 11am to do their lessons so their fingers would not be numb. Yes, it was Calif but it does get bone-chilling damp cold. If it weren't for body functions demanding it, I don't think we'd ever have gotten out of bed that winter. February came and we did Black History Month and the stark conditions we were living in paled compared to what the slaves endured. While I was racking up the historical empathy, I still didn't have much sympathy for my husband, who had bought this hovel against my advice.

One Sunday morning I sulked, cried, and complained under the covers while he took the kids to church, and I had a talk with Him about this. I had told my stubborn hubby that we should wait until the profit was in hand before committing to this project. Why did I have to suffer for his folly? I don't deserve this!!! I was innocent!!! And then....

"My Son was innocent, too, and He did not deserve what happened to Him." 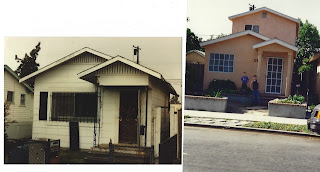 Well, if you don't want Him to answer and give you truth, better not ask Him questions. So at that moment I realized the nature of Unconditional Love, Forgiveness, and Grace. The prayer that I had said all my life without thinking about the actual terms, "forgive us our trespasses as we forgive those who trespass against us," became real. I won't stretch the truth and say that Mike got sweet kisses when he got home, but I did see him in a new light: not perfect, but still worthy of my love, respect, steadfast support. As you can see, the transformation was amazing. The house came out pretty nice, too.
Posted by Granny Good Food at 11:02 AM